PEARL HARBOR – A 2012 Wild Lake High School graduate and Columbia, Maryland, native is serving in the U.S. Navy as part of the world’s largest international maritime warfare exercise, Rim of the Pacific (RIMPAC). 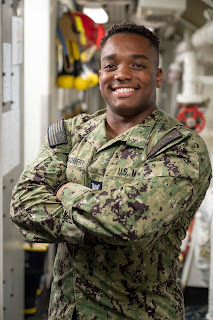 A Navy operations specialist is responsible for hunting down submarines and other surface warfare ships.

Today, Montgomery uses skills and values similar to those learned in Columbia.

“I’ve learned that no matter what, always try to put your best foot forward in everything you do,” said Montgomery.

As the world’s largest international maritime exercise, RIMPAC provides a unique training opportunity that helps participants foster and sustain cooperative relationships that are critical to ensuring safety at sea and security on the world’s oceans. RIMPAC 2022 is the 28th exercise in the series that began in 1971.

The theme of RIMPAC 2022 is Capable, Adaptive, Partners. The participating nations and forces exercise a wide range of capabilities and demonstrate the inherent flexibility of maritime forces. These capabilities range from disaster relief and maritime security operations to sea control and complex warfighting. The relevant, realistic training program includes gunnery, missile, anti-submarine and air defense exercises, as well as amphibious, counter-piracy, mine clearance operations, explosive ordnance disposal and diving and salvage operations.

“Joint operations with our foreign nation partners is a big part of RIMPAC,” said Montgomery. “Seeing how other navies do my job and learning from them is something I’m looking forward to.”

Serving in the Navy means Montgomery is part of a team that is taking on new importance in America’s focus on rebuilding military readiness, strengthening alliances and reforming business practices in support of the National Defense Strategy.

“We can transport the other services to the fight as well as bring the fight to the enemy ourselves with maritime presence,” said Montgomery.

With more than 90 percent of all trade traveling by sea, and 95 percent of the world’s international phone and internet traffic carried through fiber optic cables lying on the ocean floor, Navy officials continue to emphasize that the prosperity and security of the United States is directly linked to a strong and ready Navy.

According to Chief of Naval Operations Adm. Mike Gilday, four priorities will focus efforts on sailors, readiness, capabilities, and capacity.

“For 245 years, in both calm and rough waters, our Navy has stood the watch to protect the homeland, preserve freedom of the seas, and defend our way of life,” said Gilday. “The decisions and investments we make this decade will set the maritime balance of power for the rest of this century. We can accept nothing less than success.”

Hosted by Commander, U.S. Pacific Fleet, RIMPAC 2022 will be led by Commander, U.S. 3rd Fleet, who will serve as Combined Task Force (CTF) commander. Royal Canadian Navy Rear Adm. Christopher Robinson will serve as deputy commander of the CTF, Japan Maritime Self-Defense Force Rear Adm. Toshiyuki Hirata as the vice commander, and Fleet Marine Force will be led by U.S. Marine Corps Brig. Gen. Joseph Clearfield. Other key leaders of the multinational force will include Commodore Paul O’Grady of the Royal Australian Navy, who will command the maritime component, and Brig. Gen. Mark Goulden of the Royal Canadian Air Force, who will command the air component.

“I’m very proud that as an operations specialist, I received the master helmsman qualification which is a boatswain’s mate qualification,” said Montgomery. “I get to drive the boat!”

During RIMPAC, a network of capable, adaptive partners train and operate together in order to strengthen their collective forces and promote a free and open Indo-Pacific. RIMPAC 2022 contributes to the increased interoperability, resiliency and agility needed by the Joint and Combined Force to deter and defeat aggression by major powers across all domains and levels of conflict.

As a member of the U.S. Navy, Montgomery and other sailors know they are part of a legacy that will last beyond their lifetimes providing the Navy the nation needs.

“I think it’s important to remember to give back, to continue the traditions of those who have gone before us,” added Montgomery. “It’s my turn.”