Save the Date: #WearBlueDay Is Almost Here! 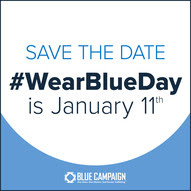 Working to end human trafficking is a year-round effort, but January is a unique opportunity to raise awareness and take action. Every year, the president typically proclaims January as National Human Trafficking Prevention Month, a time dedicated to shedding light on this devastating crime.

Blue Campaign invites you to get involved by taking a simple action: wearing blue. On Tuesday, January 11, 2022, you can participate in #WearBlueDay to call attention to human trafficking and start important conversations about the crime. All you have to do is wear something blue — an item of clothing, an accessory, an awareness ribbon — and post a photo of yourself with the hashtag #WearBlueDay on Twitter, Facebook, or Instagram. We wear blue because it is the international color of human trafficking awareness.

Stay tuned for more resources from Blue Campaign to help amplify #WearBlueDay. To learn more and to help mobilize others to wear blue, visit bit.ly/2MCCT0o.

Blue Campaign has released two new awareness videos, one for truck stop and trucking employees, and another for youth and adults who work with youth. Share these videos on social media, websites, and other internal and external communication channels:

The White House is focusing on four key U.S. and global anti-trafficking efforts in its updated National Action Plan to Combat Human Trafficking: prevention, protection, prosecution, and partnerships. As a leader in the fight against human trafficking, DHS helped develop this strategy and will support its mission in a variety of ways:

News You Can Use