DAHLGREN, Va. – “We came to America as immigrants in 1975. We left Vietnam on a giant Navy transport plane. I just finished fifth grade, and my younger brother was only eight months old. You’ve got nothing with you – no luggage, nothing,” recalled Huong Pham, the navigation senior systems engineer in the Interoperability and Navigation Engineering Branch at Naval Surface Warfare Center Dahlgren Division (NSWCDD). “We were the lucky ones.” 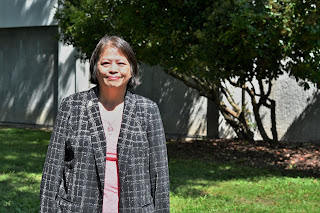 Pham was only 10 years old when her family immigrated to the United States. After graduation, she attended the University of Maryland at College Park, earning a bachelor’s degree in electrical engineering. Later, she received a postgraduate degree in computer science from Johns Hopkins University. Her desire to learn continues at NSWCDD.

“Over my career, I had hands-on experience in different areas. I did the work at the lowest levels, going out and doing the requirements, writing documents, chasing down software and code, then testing that code with ship deliveries and analysis,” recalled Pham. In her current role, Pham is a key player in two of the branch’s programs: the Automated Celestial Navigation System (ACNS) and the reinvention of the Weapons Special Network (WSN-7) as WSN-12. ACNS looks at stars and satellites to find positioning and is now fielded on AEGIS ships within the fleet.

“WSN-7 was created and named in the post-World War II era,” said Pham. The 30-year-old technology is getting a modern upgrade in the form of WSN-12. A major part of the technological refresh is the use of Model Based Systems Engineering (MBSE).

“Using MBSE methodology tools, we can teach young engineers in the organization to modernize how we do engineering and how we capture information in that model,” said Pham. “That model creates a blueprint that can be provided to contracting companies for them to rebuild and recreate the product, allowing us to install it to the fleet faster.”

Not only is Pham a senior systems engineer, leading the team in two state-of-the-art technologies, but she actively mentors those around her.

“When a new engineer comes in, I have a one-on-one session with them to ask what they need, their backgrounds and their goals,” said Pham. “I want to build the next generation with many layers – they need to have breadth and need to see the whole process.”

In addition to her work with the Dahlgren workforce, Pham volunteers with two organizations: the Boy Scouts of America and the Asian American Government Executive Network (AAGEN). Both organizations are deeply personal for her. “I have a son who recently graduated from the program as an Eagle Scout,” she said proudly. “I act as support, making sure the boys have everything they need. During cold campouts, I’ve got extra wool socks, food, hot water – whatever they need.”

AAGEN is a non-profit organization with a mission to promote diverse leadership and representation. The organization was formed by six Senior Executive Service (SES) members across the Navy and other Department of Defense agencies. They provide leadership opportunities and host conferences, including a yearly leadership conference. According to Pham, AAGEN is accessible to everyone and provides SES training to government individuals at a fraction of the cost.

“If your vision is the same as ours, we want you,” said Pham. “We want to see a diverse group of people at the table.”