Baby Sofia was born one month prematurely, as bombs fell in Ukraine. But thanks to the delivery of portable infant warmers, she can sleep peacefully 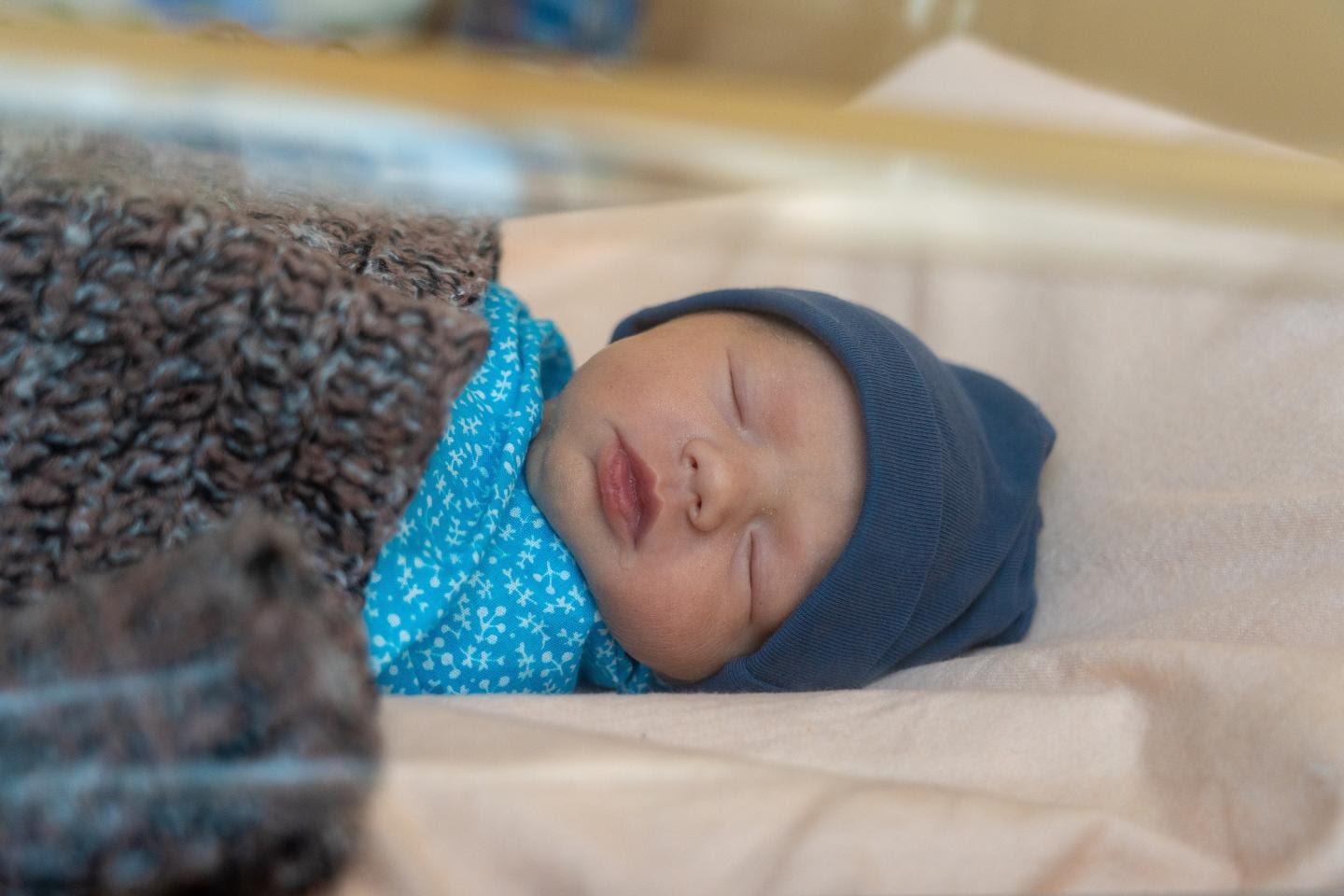 Baby Sofia is just a day old. She was born in Sumy, Ukraine as air raid sirens wailed in the background. Now, against all the odds, she sleeps quietly in a warmer.

“Thanks to God and the doctors, I made it,” says Yulia, her mother. “It’s a girl, and people keep saying it’s a good sign, meaning that peace is going to come. I hope for that so much.”

The comfort and temperature of Sofia’s little body is maintained by a special infant warmer. The American non-profit organisation ‘Embrace’ has provided 150 such devices* to the United Nations Children’s Fund (UNICEF), which has already delivered them to hospitals in Dnipro, Sumy, Pokrovsk and other Ukrainian cities. 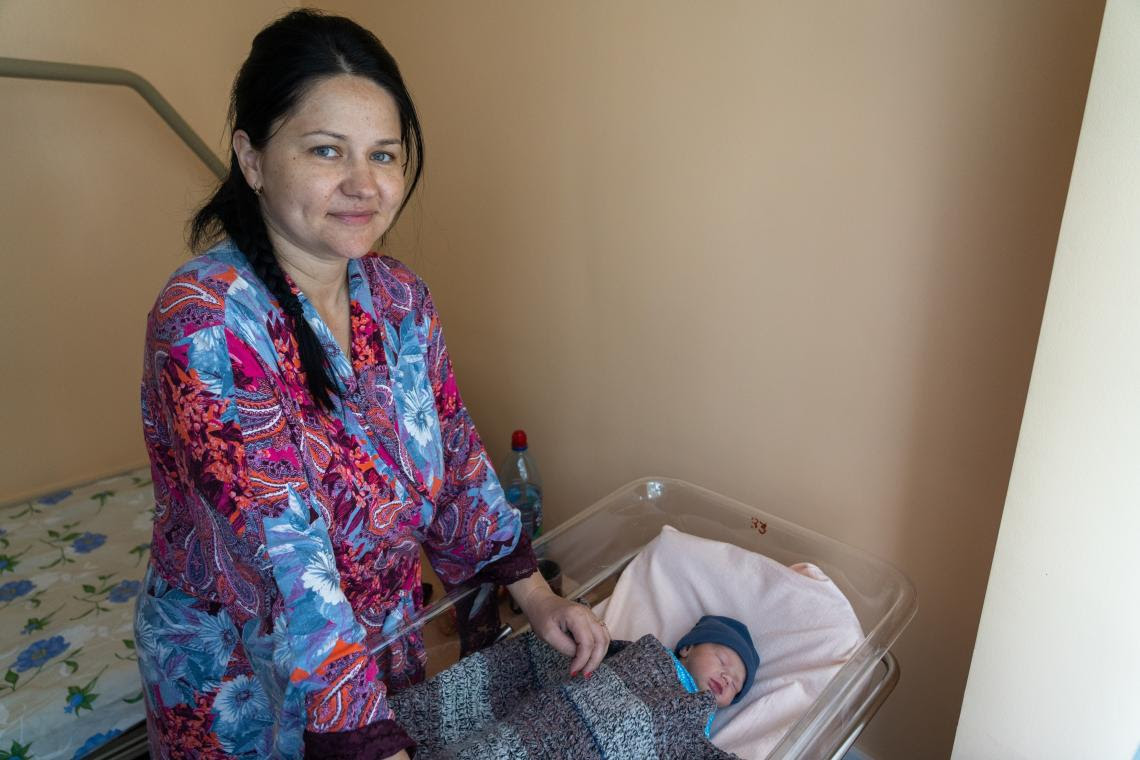 Yulia, who is 35, is grateful that her baby is able to sleep peacefully, after a difficult preterm delivery. She spent weeks before the birth, sheltering in a dark, damp basement from the planes and gunfire overhead.

“Please stay inside, it’s safer,” was all she could say to her unborn daughter, as she prayed that the planes flying overhead did not drop a bomb on their city. 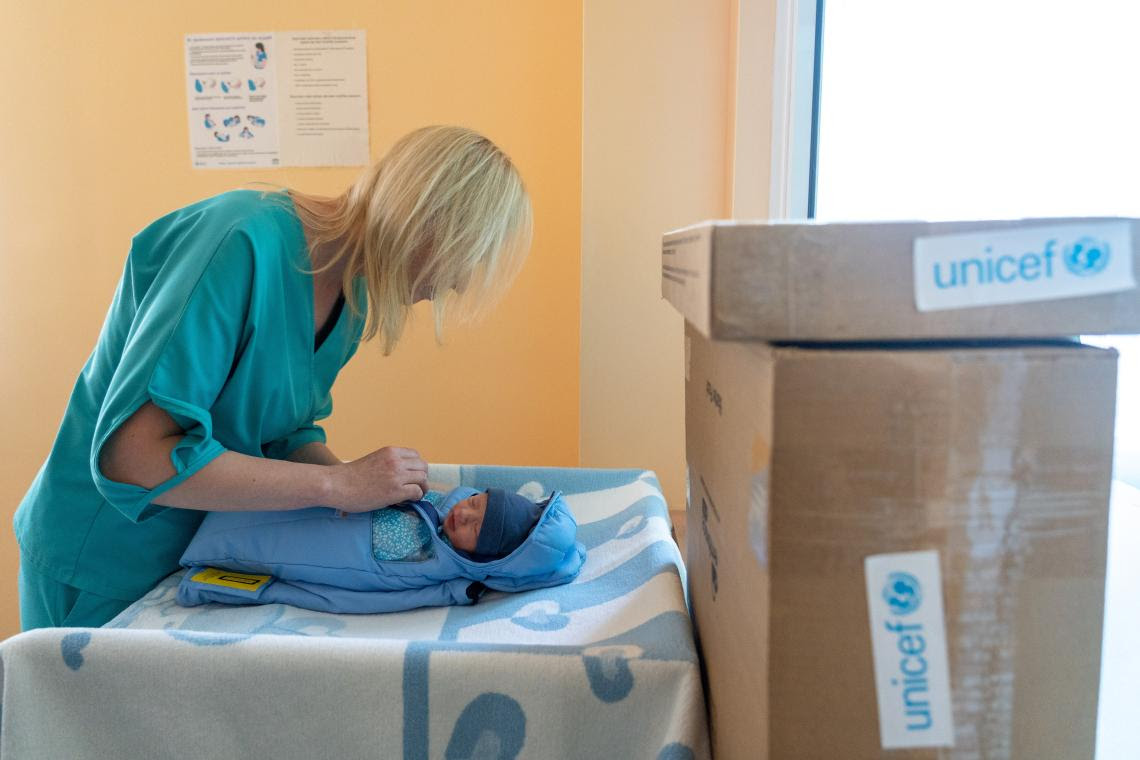 One night, she heard the news that Mariupil’s maternity hospital had been hit in an airstrike, killing scores of pregnant women.

“When I got pregnant, I was so happy, because we had had ten years of trying,” says Yulia. “And when the war came to Ukraine, I started panicking.

I wasn’t afraid for myself, the only thing I kept thinking about was where I should be hiding to protect my child and the dream I had been looking forward to for such a long time.”

As the shelling continued, Yulia feared that maternity hospitals and ambulances in Sumy would suffer a similar fate. So she began searching for information about home births. 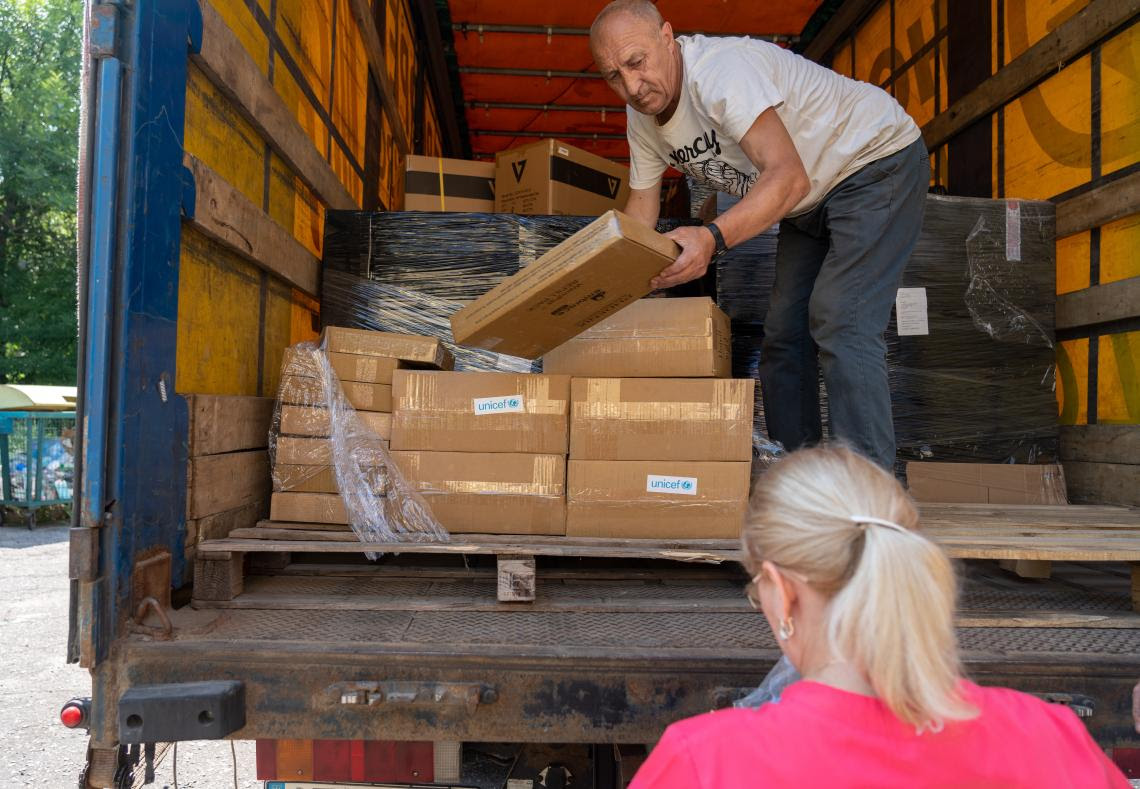 “I was four or five months pregnant and my bump started to show, so I felt very uncomfortable in the basement,” she recalls. “And all my worries led to premature delivery.”

“I’ve been missing peaceful times,” she says. “I can’t even fully enjoy the euphoria of giving birth. I hope I’ll be able to walk with a stroller soon, instead of running back and forth to basements and bomb shelters. I want a normal childhood for my baby.” 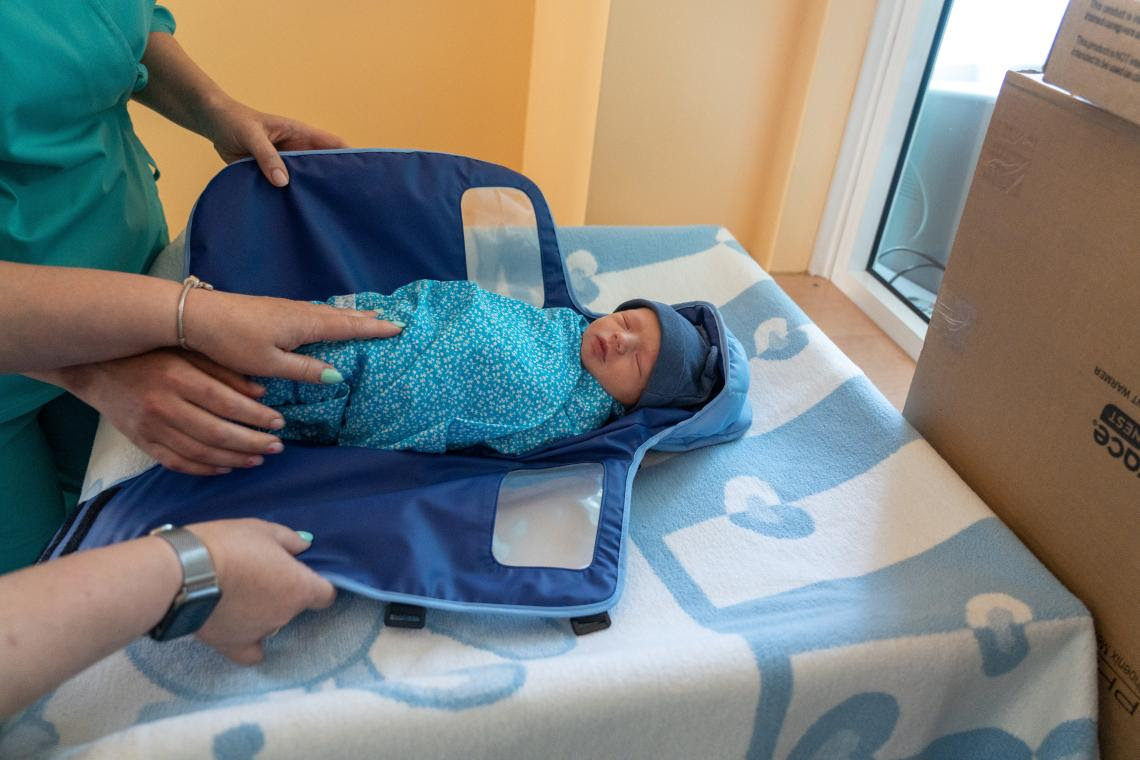 “We have to react fast”

Thanks to UNICEF and Embrace, the Sumy Regional Perinatal Center now has several portable infant warmers. Doctors say they are critical.

“Premature babies can’t maintain their body temperature, so we must artificially support their thermoregulation,” explains Valeriya Yankovska, a neonatologist in the Neonatal Intensive Care Unit.

When the war first escalated in Ukraine in February, there were four premature babies in the Neonatal Intensive Care Unit. One of them weighed less than a kilogram. During air raids and shelling, doctors would wrap the children up in blankets to keep them warm as they hid in the hospital’s cold bomb shelter. Sometimes, medics even had to ventilate the children’s lungs with their hands, because it was impossible to bring the large stationary devices down to the shelter. 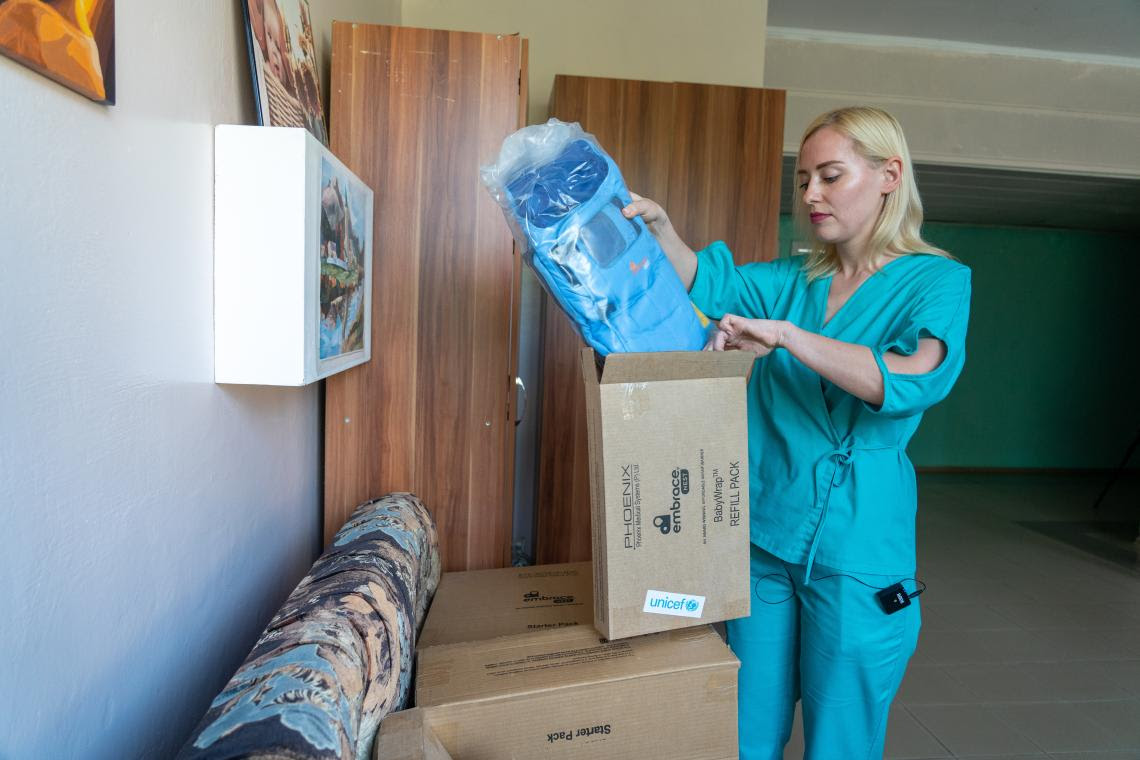 “We had to rescue children and provide them with safe conditions,” says Yankovska. “Unfortunately, our shelter is not suitable for receiving children. That’s why we had to do our job without any devices and do everything manually.”

Since February, 180 children have been born at the Sumy Regional Perinatal Center, including 21 prematurely. The portable infant warmers will save countless young lives.

“We like the ‘Embrace’ warming system very much,” says Yankovska. “These warmers are really handy as we can transport a child to the bomb shelter in warm and safe conditions. And we don’t have to worry that the child will freeze”

A portable infant warmer maintains a baby’s temperature at around 37 С for 4-8 hours. Unlike traditional incubators, they are portable, safe, intuitive and keep a baby warm without electricity, which is crucial during air raid evacuations.

“The most difficult thing about this war is the fact that we, doctors, are responsible not only for ourselves, as we don’t worry about ourselves that much, but also for women and babies,” says Yankovska. “We have to react fast.” Thanks to UNICEF and Embrace, the Sumy Regional Perinatal Center now has several portable infant warmers. Doctors say they are critical.

*UNICEF does not endorse any company, brand, product or service.