Opinion: 308 — The 1974 House Bill That Saved Maryland From Everybody Kung Fu Fighting 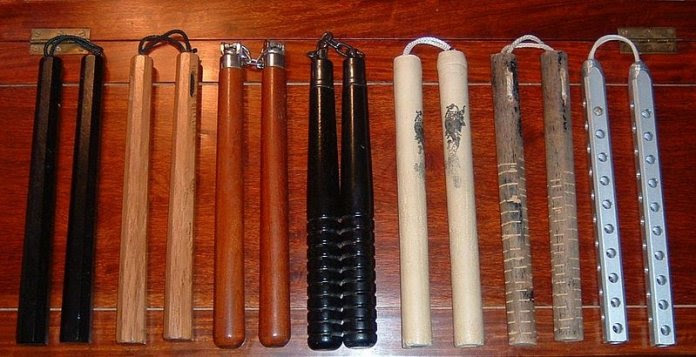 The writer has a Ph.D. in religion and theology and practices law in Maryland, but this is what happens when he also has free time.

Just the year prior, in 1973, Warner Bros. had irresponsibly released the film “Enter the Dragon,” which introduced dangerous new ideas into the American criminal landscape. The movie stars Bruce Lee and finds him entering a secretive martial arts tournament in order to investigate the tournament’s organizer for drug ties.

With its generally too real depictions of martial arts combat, “Enter the Dragon” taught American audiences dangerous new combat and weapons techniques that would soon debut on urban battlegrounds across the country. Of particular concern, the film taught audiences across the country how nunchakus could be used safely and effectively in the commission of violence.

By 1974, everybody was kung fu fighting. See Carl Douglas’ “Kung Fu Fighting” (1974). Mastery had come quickly, with lightning-fast kicks and expert timing being used by criminals to frighten a defenseless citizenry. See id. No town was spared. Maryland was in crisis.

But as the 1974 legislative session of the Maryland General Assembly drew near, Maryland lawmakers’ hands were to some extent tied. Maryland law treated the question of expertly timed kicks as assaults. See Apple v. State, 190 Md. 661 at 664-65. The Maryland Constitution’s Declaration of Rights guarantees to citizens the English Common Law of 1776, and the common law treated assaults as misdemeanors. See Md. Const. Decl. of Rights at Art. 5; and also Hobbs v. Warden, Md. Penitentiary, 223 Md. 651 at 653 (1960).

As Maryland’s highest court, the Court of Appeals, long ago explained, “The common law declares that no arrest can lawfully be made for any misdemeanor [including assault] unless it is committed in the presence of the arresting officer or until a warrant has been issued by a magistrate.” See Brown v. State, 207 Md. 282 at 285–86 (1955). This meant that law enforcement officers responding to reports of martial arts-based violence could not make arrests in most instances, no matter how many witness accounts or corroborating signs of nunchaku use.

The Maryland Declaration of Rights was having the unintended consequences of insulating martial arts-wielding assailants from prosecution. But with everybody kung fu fighting, inaction simply was not an option. Enter House Bill 308, which represents the first appearance of the term “nunchaku” in Maryland law.

The nunchaku was clearly at the forefront of legislators’ concerns since, according to the Session Laws of 1974, available from the Archives of Maryland Online, House Bill 308 was introduced, “For the purpose of Baking it unlawful to wear or carry, concealed or openly, a nunchaku, defining the term, providing penalties, and relettering subsections.” Emphasis in the original. Usually, legislatures are content to restrict themselves to simply making laws. When they venture to bake a law, they really mean business.

With the bake underway, the Maryland General Assembly carefully defined the object of its concern, legislating that:

THE TERM “NUNCHAKU” MEANS ANY DEVICE OR PRODUCT CONSISTING OF TWO 12 TO 15 INCH LONG HARD OAK STICKS JOINED BY A CHAIN OR LEATHER STRAP, USED AS A DEFENSIVE WEAPON IN THE ORIENTAL MARTIAL ARTS AND CAPABLE OF INFLICTING DEATH WHEN PROPERLY USED, OR ANY SIMILAR OR SIMULATED DEVICE OF WHATEVER MATERIAL CONSTRUCTED.

House Bill 308 (1974) (emphasis in original). House Bill 308 then added nunchakus to the list of traditional, old-timey gangster movie weapons that the Maryland General Assembly had already seen fit to protect the public from:

Id. (emphasis in original). Law enforcement finally had the public safety tool it needed to effectively end the crush of “Enter the Dragon”-inspired street violence oppressing Maryland; and the text of the law, clearly demonstrates the General Assembly’s preoccupation with the detrimental effects of Bruce Lee-based media.

While there remains some debate among scholars, “oriental martial arts” is generally considered a legislative term of art for “that Bruce Lee movie that came out last year.” House Bill 308’s description of a nunchaku is clearly a legislative aide’s best guess as to what Bruce Lee is holding in the scene from “Enter the Dragon” where he aces everyone with a nunchaku (“it was about a foot long, maybe oak …”). Lastly, the General Assembly’s specific focus on the potential harm nunchakus can cause “when properly used” aptly demonstrates that, but for Bruce Lee’s expert demonstration of how a weapon that is clearly most dangerous to the user can be used to harm others, House Bill 308 would never have been necessary.

House Bill 308’s effect on martial arts street violence was not immediate, however. The threat of martial arts-based violence continued, and the law would eventually be updated.

In 1985, the same year that would see the release of the film “American Ninja,” House Bill 89 added the star knife (colloquially known as a “ninja star”) to the list of banned weapons Marylanders could no longer carry.

House Bill 89 defined a star knife as, “A DEVICE USED AS A THROWING WEAPON, CONSISTING OF SEVERAL SHARP OR POINTED BLADES ARRAYED AS RADIALLY DISPOSED ARMS ABOUT A CENTRAL DISK.” Emphasis in original. It is highly likely that the General Assembly’s quick action on the threat of ninja weapons such as star knives in 1985, which it managed to pass and implement prior to the release of American Ninja in August of that year, prevented a martial arts arms race that would have seen Maryland’s streets flooded with nunchakus, throwing stars, psais, katana swords, bo staffs and anything else the Ninja Turtles use to fight the Foot Clan.

Since 1985, Maryland has seen a stark reduction in martial arts-based violence.

Today, it is exceedingly rare for a Maryland citizen to find themselves staring down the barrel of a hard oak stick or on the receiving end of a star knife. Today’s crime and court reports document a dearth of ninja activity or other martial arts-based street violence.

While some advocates argue that House Bill 308 and its progeny have had a disproportionate effect on Maryland’s ninja population, anecdotal evidence suggests strongly that Maryland residents remain among the most satisfied Americans with the level of ninja and other martial arts-based violence in their communities, with the issue rarely arising in political campaigns or legislative debates.

As such, House Bill 308 serves as an important reminder that law can yet be marshaled to improve the lives of regular folk.