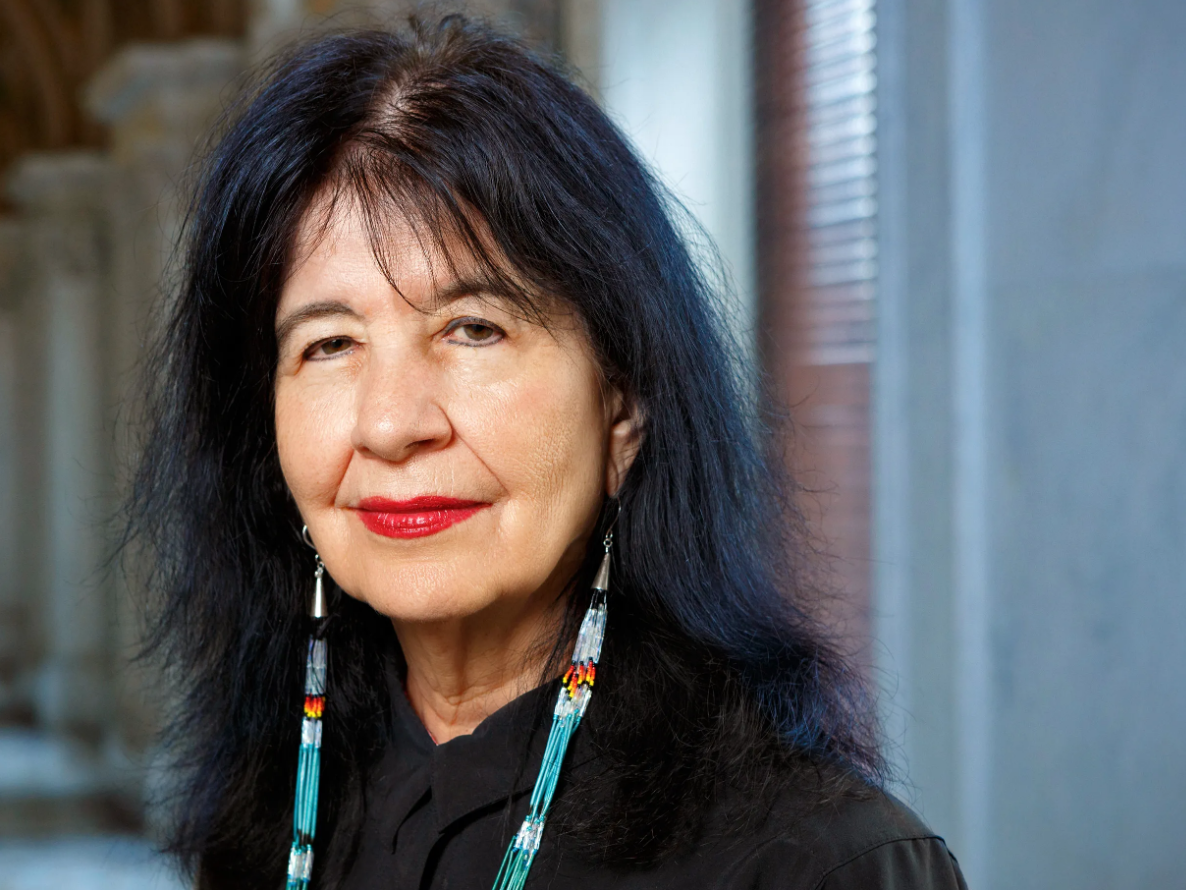 The Library of Congress will celebrate Joy Harjo, the first Native American U.S. poet laureate, as her three terms in the position come to a conclusion with two public programs at the end of April.

“For a remarkable three terms as U.S. poet laureate, Joy Harjo has tirelessly promoted Native poets and poetry,” said Librarian of Congress Carla Hayden. “To her, poems are ‘carriers of dreams, knowledge and wisdom,’ and she has been an insightful voice during the difficulties of a pandemic. We are eager to welcome her back to the Library to celebrate her tenure as poet laureate and to host the In-Na-Po retreat on her behalf.”

The Poet Laureate Closing Event will take place in the Coolidge Auditorium on Thursday, April 28, at 7 p.m. ET, and will feature Harjo (an enrolled member of the Mvskoke Nation) reading and discussing her favorite “ancestor poems.” The evening will begin with a performance by singer-songwriter Jennifer Kreisberg (Tuscarora, North Carolina) and will include a reading by poet Portlyn Houghton-Harjo (Mvskoke, Seminole). Harjo will end with a performance of her poem “Remember.” Tickets are free and available here. The event will also be livestreamed on the Library’s YouTube channel and Facebook page.

On Friday, April 29, at 7 p.m. ET, the Library will host a dance party for Harjo in the Montpelier Room featuring DJ Tnyce (Haliwa-Saponi) — and showcasing songs selected by Harjo as well as recordings of her own work. Tickets are free and available here.

Concurrently, the Library will host the historic first retreat of In-Na-Po — Indigenous Nations Poets, a new organization mentoring emerging Native writers founded by former Wisconsin Poet Laureate Kimberly Blaeser (Anishinaabe, White Earth Nation). Harjo is an advisory board member of the organization. Throughout the week, a cohort of 30 fellows, faculty, and guests will participate in workshops and panel discussions in the Library’s Jefferson Building. They will also visit the Library’s American Folklife Center, which developed a new digital collection of recordings for Harjo’s “Living Nations, Living Words” signature project, and see items from its collections as well as from collections around the Library. Retreat faculty and guests include: Luci Tapahanso (Diné), the first Poet Laureate of the Navajo Nation, and her successor, Laura Tohe (Diné); recent National Poetry Series winners Heid Erdrich (Turtle Mountain Ojibwe) and Jake Skeets (Diné); and other award-winning writers such as Deborah Miranda (Esselen and Chumash) and Elise Paschen (Osage).

“This has been an incredible moment to serve poetry and to celebrate the historic, ongoing contributions of the original peoples of these lands,” Harjo said. “I’m thrilled to conclude my laureateship with In-Na-Po’s inaugural retreat, which marks a fresh beginning for emerging generations of Native poets.”

The American Folklife Center is co-sponsoring the In-Na-Po retreat as part of the Library’s Of the People: Widening the Path initiative, supported by an institutional grant from the Mellon Foundation. Of the People is multiyear effort to connect the Library more deeply with Black, Indigenous and communities of color historically underrepresented in the United States and in the Library’s collections.

Harjo’s rare third term in 2021 and 2022 provided her an opportunity to complete projects and programs whose timelines were affected by the COVID-19 pandemic. Harjo’s signature project, “Living Nations, Living Words,” is available at loc.gov/programs/poetry-and-literature/poet-laureate/poet-laureate-projects/living-nations-living-words/. This digital project features an interactive ArcGIS Story Map, developed with the Library’s Geography and Map Division, which maps 47 contemporary Native American poets across the country.

The map connects to a new online audio collection developed by Harjo and housed in the Library’s American Folklife Center, which features the participating poets reading and discussing an original poem. Each chose their poems based on the theme of place and displacement, and with four focal points in mind: visibility, persistence, resistance and acknowledgment.

As poet laureate, Harjo has joined hundreds of virtual and in-person events across the country to celebrate the power of poetry. She also joined the Library of Congress National Book Festival virtually in 2020 and 2021, and her festival presentations were featured on PBS and by The Washington Post.

Traditionally the poet laureate participates in two signature literary events at the Library: an opening reading to launch the Library’s literary season and a lecture or panel to close the season. Harjo’s first- and second-term closing events were cancelled due to the pandemic; her third term provided an opportunity to return to the Library to celebrate the conclusion of her laureateship.

Joy Harjo was born in Tulsa, Oklahoma, on May 9, 1951. She is the author of nine books of poetry, including her most recent collection, “An American Sunrise” (W.W. Norton), as well as “Conflict Resolution for Holy Beings;” “The Woman Who Fell From the Sky,” which received the Oklahoma Book Arts Award; and “In Mad Love and War” (Wesleyan University Press), which received an American Book Award and the Delmore Schwartz Memorial Award. Harjo has also written two memoirs, “Poet Warrior” (W.W. Norton) and “Crazy Brave” (which won the 2013 PEN Center USA literary prize for creative nonfiction), as well as a children’s book, “The Good Luck Cat” (Harcourt), and a young adult book, “For a Girl Becoming” (University of Arizona).

During her tenure as laureate, Harjo also co-edited two anthologies featuring Native poetry: “When the Light of the World Was Subdued, Our Songs Came Through: A Norton Anthology of Native Nations Poetry” (W. W. Norton) and “Living Nations, Living Words: An Anthology of First Peoples Poetry” — an offshoot of her signature project, published in partnership with the Library of Congress.

For more information on the Poet Laureateship as well as other poetry and literature programs of the Library, visit the Poetry and Literature website.