Fear is a City that Copts Inhabit 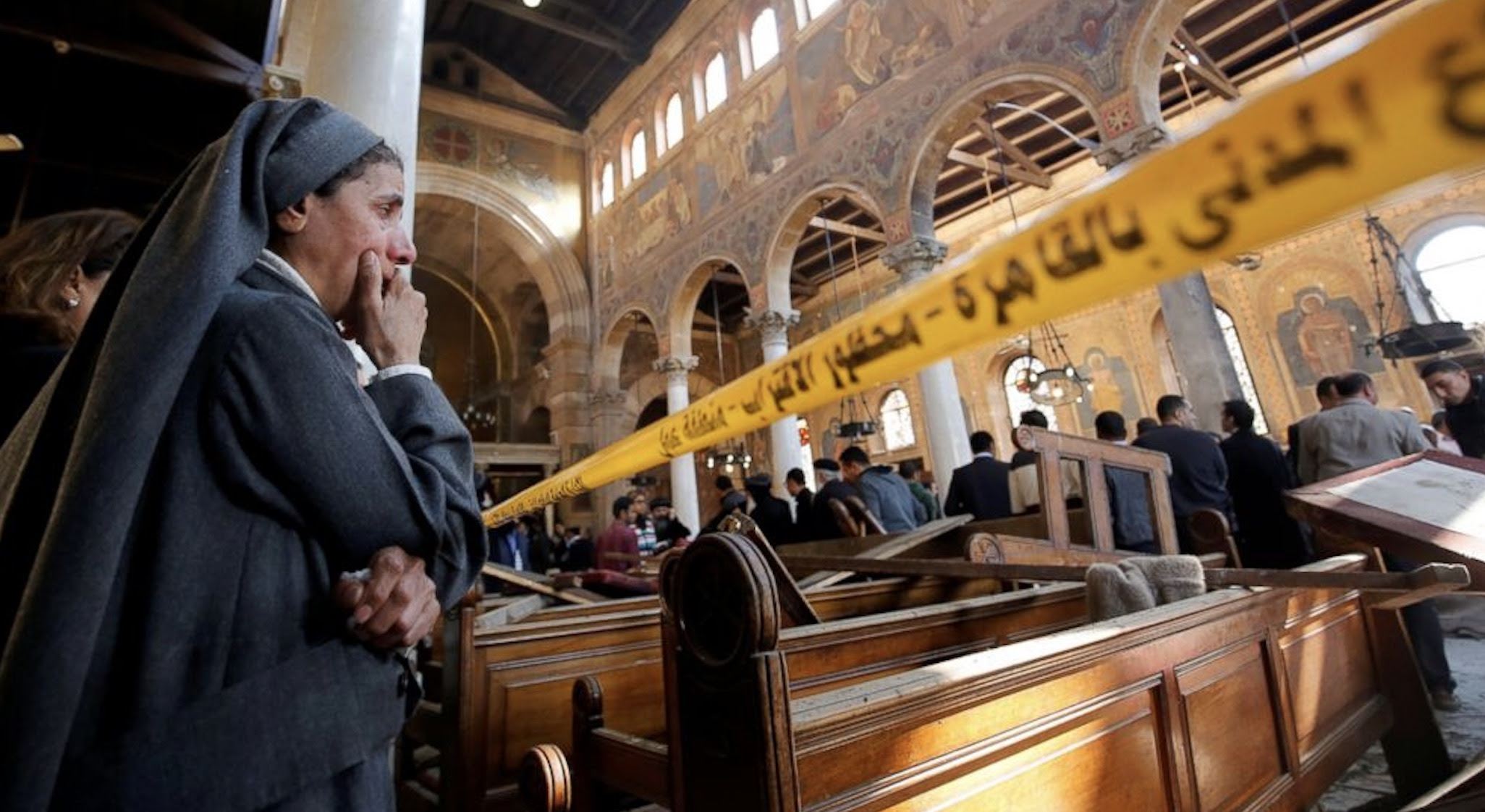 It’s 2010: armed men exchange gunfire, rocks and Molotov cocktails are tossed, and deafening silence inhabits our household when my teary-eyed mother says, “this is just the beginning.”

My mother’s five-word sentence was short, concise, but bore great meaning to what we would later perceive as the norm. Every news channel headlined, “Massacre of Coptic Christians on Christmas Eve.”

This was my first recollection of fear – later, this fear would become a city that my friends, family, and I, as Copts, inhabited. From this point forward, I became absent, a witness disquieted by the violence that became commonplace in Egypt, a home to roughly 10 to 15 million Coptic Christians.

I was 14-years old at the time and had a mere observing presence: eavesdropping on my parents’ bedroom as I heard their heated debates between the years 2010 until 2013, “should we flee this country? Or should we wait until we are no longer welcomed?”

My mother had imagined a better future for our family outside the borders of this country, because what felt like home suddenly felt foreign, but my father was not ready to leave Egypt quite yet. Many Christians were fleeing the country already, making way towards Canada and the United States of America.

At this time, former president Mohamed Morsi had been in power following the 2011 revolution; he had been ‘democratically elected’ at the detriment of former government frontman and presidential candidate Shafeek. The news of Morsi’s arrival had come as a shock, but nothing could prepare Egyptians for a seeming proliferation of Islamist moves.

It’s 2012: on a warm Friday morning, I make my way to morning mass. I was once greeted by a big entrance, but it was now replaced with a much narrower security check machine that beeps because of the phone in my pocket. None of this perplexes me until I am asked to show my ID.

The questions I begged the most were mainly centered around “why? Am I supposed to feel unsafe going into my Church? My sanctuary? Worse, what if my ID didn’t say Christian, are we gatekeeping now?”

Life felt peculiarly dangerous, but possibly one of the most vivid recollections of estrangement in my home country was when Morsi did not attend the inauguration of the current Pope Tawadros II on November 18 2012 at the Abbasiya Cathedral. There were rumors too, of Islamists taking key positions in the government, of mandating beards and increasing religious strictness.

After Morsi was ousted in 2013, that fear slightly withered and atrophied, possibly because I had either become desensitized as the years segued.

Maybe it was looking at the wrong end of the telescope, but I wanted life to feel normal again.

Christians aren’t visitors to Egypt, we’re part of its history – after all, the words ‘Copt or Coptic,’ are linguistically intertwined with the words, ‘Egypt or Egyptian,’ as they come from the same origin.

Yet, for years, Copts have been described as embattled: our faith is tattooed on our wrists and worn around our necks. The tattoo serves as an important symbol of kinship and belonging to the same faith. But we’ve all heard the stories of violence, killings, religious discrimination at work, segregation and intolerance. 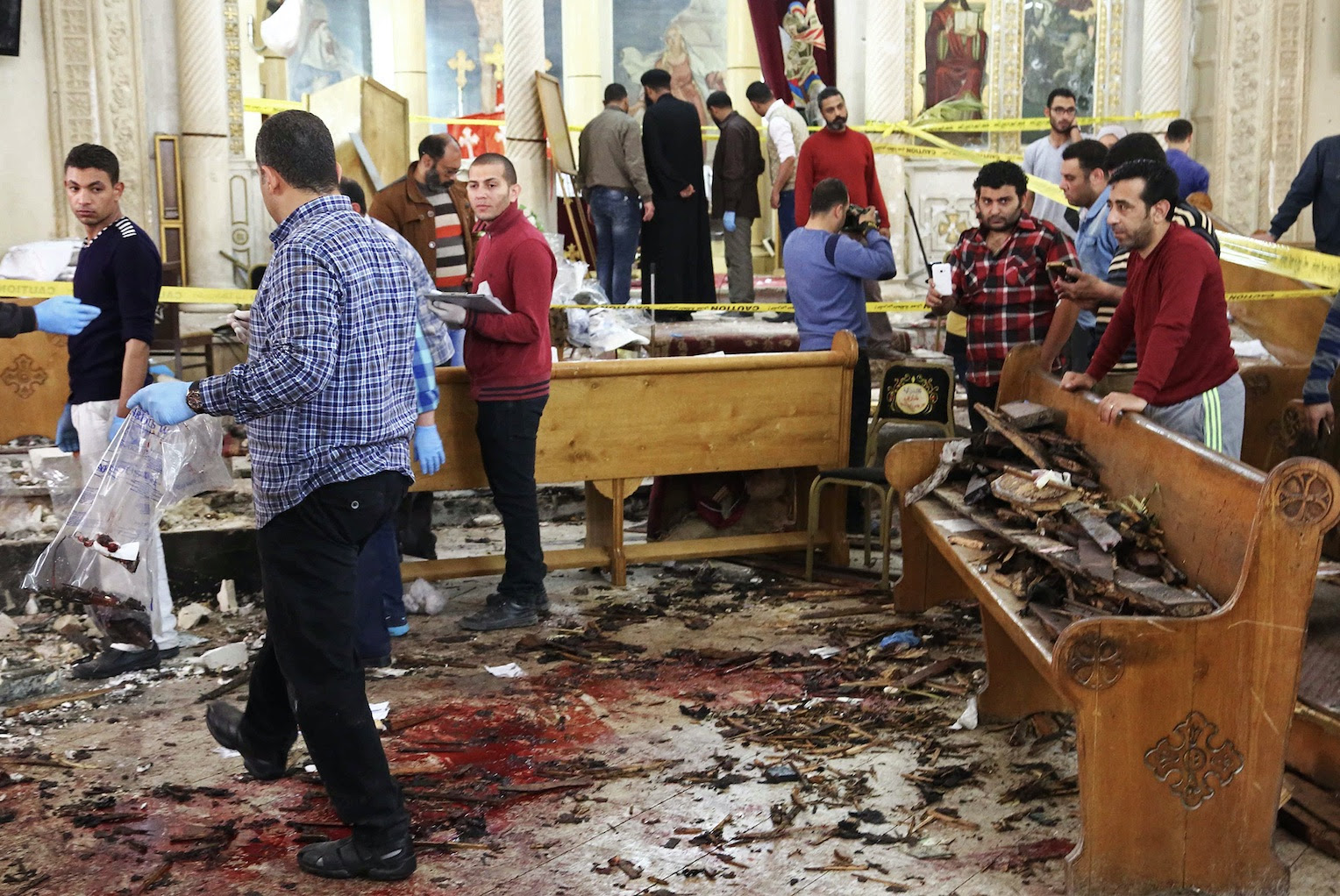 The Abbasiya Cathedral was attacked on 7 April 2013, where a funeral was being held for four Coptic Christians who were killed in clashes in the Qalyubiya governorate. But even after Morsi’s ousting, the violence remained. In 2017, at least 49 people were killed and 110 injured on Palm Sunday after a Church attack. A whole city mourned, but that still wasn’t enough.

I’m 24 now, and not enough years have gone by for me to be comfortably numb. I often veer from grief and despair.

The week of tragedies that unfolded earlier this month startled me and everyone around me seemed to be at a crossroads.

A Christian woman and her daughter were denied food at Koshary El Tahrir during this year’s Ramadan, a presumable kidnapping of Christian woman Mariam Wahib, Al Masry Al-Yom published an article that described non-Muslims as “infidels,” and a Coptic Priest has been stabbed to death in Alexandria, all in the same week.

I found people coming in to give their condolences to me, but I wasn’t grieving, I wasn’t angry, I was scared. I thought I had killed the part in me that was easily-provoked, who wrote long threads on Facebook screaming for help.

The turning point for me was when I was expressing my frustration to my mother about what had happened recently, who seemed to not meet me halfway. She had been angry and frustrated for a much longer time.

At the same time, a Coptic Christian friend’s Google search is flooded with research, looking for the nearest one-way ticket out of the city of fear. “I have no place here. I have no room to dream, and no space to grieve,” she once said to me.

There are thousands like her, resettling in Canada, the UK or mainland Europe.

Copts in Egypt are seldom mentioned, constantly forgotten, greeted in two celebrations per year. Although there are more efforts to integrate them in the public, private and juridic sectors, these efforts are nowhere near enough, and so we make due. We cling to our land, and our language, refusing to abandon either just yet. My family missed the train of the Coptic exodus from Egypt, though we lost many loved ones because of fear.

I didn’t want to grow up sidelined, marginalized, or worst of all – pitied. My confidence in this country waned year after year, with no hopes of redemption. I am a victim of desensitization, and although I am taught to forgive, sometimes I cannot do its twinflame: forget.

Any opinions and viewpoints expressed in this article are exclusively those of the author.